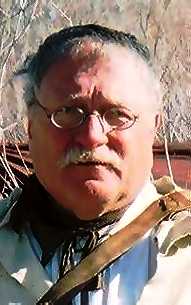 Some of my great great grandparents homesteaded in this county in northwestern Iowa in the 1870's shortly after the Sioux uprising had subsided. I still have many relatives in this county, one of whom is still farming one of the original homesteads. My mother's father and my dad's mother were both born in the county. My dad's dad hails from Macon County, Missouri where the Walkers migrated to from Botetourt County, Virginia in the 1830's. My whole family were farmers and livestock raisers.

With this background I have always had a deep appreciation for the land and its plants and animals. I grew up doing farmwork and being outside for most of my activities. Most of the kids I knew had similar backgrounds and our activities were also similar. I started driving farm tractors at age 5 and pickups at age 9. I had regular chores to do starting at an even younger age, such as feeding the calves and pigs and chickens and collecting eggs. I have been involved in some phase of agriculture ever since either as a worker, producer, supplier or financier. I have worked on grain farms, cattle ranches, a cattle feedlot, a grain elevator, as a loan officer in a bank, an owner/ operator of a feedmill, a cattle raiser and a farmer. I have also worked as a carpenter and a steelworker while going to and completing college, interrupted by a 3 year stint in the army from 1966 through 1968. I was lucky enough to be stationed at White Sands Missile Range, New Mexico for my whole tour after basic and MOS training and was honorably discharged at Ft. Bliss, Texas as a Specialist 5th Class.

I was first married in 1965 and have four daughters by that marriage. I started them all camping when still babies. A couple of them still engage in camping activities with there families. My second and present wife of 21 years and her son and I also camped, hunted and fished a lot.

My first experience camping was when my younger brother and I set up a canvas grain tarp as a tent out behind a machine shed. Our parents rescued us in the middle of the night from a huge thunderstorm. We weren't worried, but they sure were. That was the beginning of a lifetime of camping experiences which continue to this day.

My first river experiences were actually on the creeks that ran through our farms, whether it was swimming, fishing or building rafts to float on them or hunting for carp and snapping turtles. Our other swimming holes were in gravel pits. My brother and I played cowboys and Indians out in the pasture chasing each other on horses. We built tree forts, snow forts and climbed to the tops of the trees. Mom would not watch us.

My earliest hunting forays, with dad's .22, were for the pigeons and rats that were always present on farms. I moved on from there to rabbits and then got to hunt deer with a shotgun with slugs when I was 16. My dad did not hunt so I learned the hunting skills I have from others as well as many years of hunting. I have bagged deer, antelope, fox, coyote and other non-game species and have yet to bag an elk despite many attempts. All of my hunts are successful even though I often do not pull the trigger.

The opportunity to be out amongst natures bounty is ample reward. I recently had another reward on a float trip on the Missouri River in Montana. The weather was perfect, mid 60's under clear skies and crisp at night. The leaves were starting to show great color, the deer were numerous as was the waterfowl and the young eagles were flexing their muscle. The land was showing off. It was wonderful. Being able to share this with my traveling partners was a bonus. It's too good to keep to yourself. I called my brother as soon as I got home to urge him to take the same trip.

I have been an active member of the Lewis & Clark Honor Guard in Great Falls since 1992 and a board member and Quartermaster the last two years. The Honor Guard's focus is on educating the public about the Lewis & Clark Expedition in 1803-1806. The HG does this through re-enactments in 1st person or through 3rd person presentations about the history or through skills demonstrations. A years events culminate with a 2 day encampment at the end of June where both 1st and 3rd person demonstrations are presented. All these events are done in period clothing and accoutrements as are flag ceremonies done before civic groups throughout the year. Classroom presentations to schoolchildren are done 3rd person. I usually do at least a half dozen30-40 minute demos. each year by myself. I consider the Honor Guard members as some of my best friends.

For a number of years I have been an NRA member and donate on a regular basis to protect our firearms rights. I am also a 25 year member of American Legion Post 51 in Augusta, Montana and a past commander there. Although not presently active I continue to pay dues and support the goals of the Legion. I feel it is the one group that watches out for the interests of all military veterans of service for our country.

Since 1975 I have owned horses and have used them for working cattle, for hunting, for packing and for pleasure. I've used them in all seasons and in all types of weather. My 1st trip into the Bob Marshall Wilderness was on a 2 year old mare I had raised from a baby. That was an 80 mile trip over several days with a retired forest service and Legion buddy who has since passed on. We packed 2 mules and traveled the length of the Chinese Wall on our tour east of the Continental Divide.

Another friend and I made an 80 mile 10 day trip over the Divide to the Danaher, down the south fork up and over the White River Pass, this time with 4 horses. He and I have also made summer, fall and winter trips into an area we hunt in the Bob. We use a wall tent with a stove to heat and cook on in cold weather. Our saddle blankets serve as insulation and padding under our blankets. The winter camps can be anywhere from 35 below zero to 45 above and snow or rain or chinook winds. We use horses to pack out meat. This is in grizzly bear country and the bears are active during hunting season.

I have taken a number of people on pleasure trail rides in the Bob. It's always a treat to share the wilderness with someone, especially a first timer. I've also taken people on cattle drives at the ranch of two brothers, both close friends. The person accompanying me would ride one of my horses and it was usually his or her first cattle drive. Aside from getting to be  cowboys for a day we pass through some pretty nice rolling country. Occasionally I go out to the ranch to lend a hand and just be with good friends.

I look forward to meeting and sharing with and making new friends with other compatible people and keeping the history of early America alive.