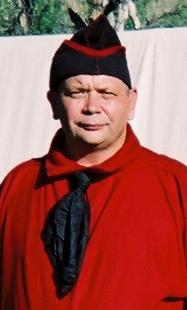 I grew up in a family that did not believe in hunting or fishing, and guns were not apart of our household. I did read all the Louis Lamour books I could get my hands on.  It helped form my basic beliefs: that a man should be good for his word, and if a man says he is going to do something; then it will get done; period. I was determined to learn the skills and help develop the abilities, which were actually needed and used by the original Mountain Men.  I believed that the second amendment meant what it said, that all free men had the right to keep and bear arms.  It was at this time I discovered that many of our wildlife species would no longer exist if not for the efforts of hunters.  I was determined to become a self-reliant individual, learning the skills necessary to survive on my own.

It was not until I got out of high school that I became interested in shooting and hunting.  My first rifle was a 22 marlin, which I still own today.  I started using this in college for plinking.  During my first summer job at a YMCA camp, I set up a shooting range for the girls’ camp and taught about 30 girls how to shoot.  I set up a range, and shooting windows, with a separate area for the girls to wait that were not shooting.  The only mistake I made was when a squirrel ran across the backrest.  I immediately grabbed a rifle and dropped him.  With much screaming, and wailing, and gnashing of teeth, the girls convinced me to give the squirrel a decent Christian burial. Not much of a start for a great white hunter.

My next exposure to guns came when I joined the navy.  I was in 10 years, and spent part of the time on the east coast.  At the time the only other person interested in the outdoors was a guy I couldn’t stand.  However neither of us could find a partner, so we decided to go canoeing together.  There were bets on who would be found floating down the river.   He taught me about using pistols, and took me on my first deer hunt using shotguns and slugs. It was during this time I got a hold of a CVA Kentucky rifle kit.  I lived in the poorest section of town, with a high crime rate.  When I started building the Kentucky rifle on the porch, the crime rate went down for a six-block radius.  I started shooting the percussion rifle, and was surprised at how accurate it was.  I then started studying history and checking out some of the historical sites in the area.  While I was looking for black powder and balls, I was introduced to the NMRLA magazine Muzzle blasts.  I became a fan and it was the start of my education. I have since become a lifetime member of both the NMRLA and the NRA.  Without them, we would have lost our second amendment rights long ago.

When I got out of the Navy, I moved back to Montana.  I attended a couple of the Western Rendezvous, and started to pay attention to who looked right, and who had a bunch of foo foo raw that looked Hollywood.  I was attracted to and started hanging out with the die hards whose camps were totally pre1840’s.  No bear claw chokers, no reservation period beaded strips. One of the old codgers turned me on to the writings of James Alexander Thom, Allan Eckert, and David Wright. He also pointed me to Hanson’s books and the museum of the fur trade.  At this point I started to move away from Hollywood mountain men, and Disney frontiersmen to more authentic research.  I became involved in a group called Royal Rangers, and began working with boys.  I became involved in the Frontiersman Camping Fraternity, and started studying the history of the American fur company, of Hudson Bay, and the great mountain men.  I became the owner of a teepee and learned flint knapping.  I was in the first world atatal contest and took 5th place.  I met a member of AMM about this time, and was very interested, but we could never connect.

I am currently an active member of the Lewis & Clark Honor Guard, which is a partner with the Lewis & Clark Interpretive Center in Great Falls, Montana. I occasionally shoot in club shoots and woods walks with the Frontiers Camping Fellowship where I am also a member. I do a variety of Lewis & Clark programs, and teach about Indian sign language, medicine of the time, furs, and trade goods.  I have taught at Kipp campground, Three Forks, and Salmon Idaho, and the river encampment in great falls.  Some were multi-day events.  I have also taught junior high school kids the basics of blacksmithing for several years. They either make a hoof pick or a screwdriver.  It teaches them the basics of shaping the metal, flattening, and working it both hot and cold.

I belong to several historical discussion groups and do extensive personal research to improve my knowledge and my programs.  I tend to be a bit more critical of the inaccuracies I find in the shoots and vous I have been attending, which leads to a bit of dissatisfaction. . I’ve been looking for others who have the same interests, interests illustrated by Mark Bakers videos and articles and John Curry’s writings. I want to be with a like group of men who enjoy historical research, take pleasure in the outdoors, and who get enjoyment from practicing living history and experimental archeology. I have a deep interest in history and primitive technology, in practicing living history, in sharing that information with others and I have a great affinity with nature.

I have wanted to be in AMM since I first heard about it almost 20 years ago.  After finally being in one place long enough, having the time and especially after meeting several AMM members, things are finally coming together. After meeting a number of AMM members at Salmon, I am convinced even more that this is what I want to do. I look forward to improving myself, my wilderness abilities, and improving my knowledge and skills. I look forward to meeting men I can trust and have similar interests.